I recently got a notice of my 40 reunion..., and request to submit something for the "memory book". Here it is. 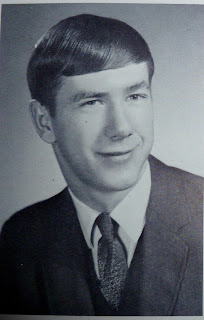 After graduation from Timberline (Weippe-Pierce) in 1970 I spent a semester at the University of Idaho, then dropped out and went to work in the woods.

I was one of the last of the draftees in 1972, and did my Basic Training at Fort Ord, CA before being assigned to Fort Eustis, VA. After I got out of the Army I worked at the Jaype plywood mill for a while before going back to work in the woods. The winter of 1978 I gave school another try at Lewis-Clark State College on the GI Bill. With no major in mind, I just picked out subjects that I was really interested in..., like Photography, Philosophy, Psychology, Intro to the Short Story, and Creative Writing. That only lasted one semester too.

In 1979 my younger brother Larry and I bought a used Skagit SJ-4 swing yarder and began contract logging on our own. By 1987 Spence Brothers Logging had acquired a Link-Belt 78 loader, a D-7 Cat and a Case rubber tired skidder as well. We had managed to have everything paid off and I was looking for new adventures when I took a job cutting timber in Forks, WA in the spring of 1987.

I had initially intended to just work during the yearly spring lay-off period that is common in Idaho. But once I got a taste of cutting really big timber "on the coast" and discovered the beauty and climate of the Olympic Peninsula, I decided to stay a while longer. It did take a while to get used to the rain in this area..., they don't call it The Rain Forest for nothing. But when the skies clear, I will guarantee you that there are no bluer skies anywhere that I have ever been. I was cutting big timber on Anderson Ridge on one of those days and I could look to the east and see the snow-capped Olympic Mountains gleaming on the skyline..., and look to the west and see the white crests of the Pacific Ocean waves breaking on the sea stacks at LaPush. Larry and I didn't have any jobs lined up for our equipment anyway. That summer Julie and I got together. She was in the process of getting a divorce and her ex-husband was in Clearwater County, so she didn't want to go back there. That suited me then..., and has for the last 23 years. And I should mention..., that the first winter on the coast went a long way toward keeping me here. After years of winter logging in Idaho in 20 or 30 degree below zero weather and sometimes eight feet of snow..., here in Forks the boss I was working for decided that at 8 degrees above zero and three inches of snow..., it was too cold and miserable to be out in the weather working. I haven't once regretted trading the snow of Idaho for the rain of the coast.

That doesn't mean that the adventures were over. In June of 1991, Joe Henson called from Alaska. He was working up there as a timber cutter and said that the company he was working for needed more cutters. The Spotted Owl controversy was in full swing in this area, the outfit that I was working for had cut us back to five days a week from six, and we had experienced a two week lay-off recently. So, with some misgivings..., by far the largest was leaving Julie in Forks..., I was on a plane to Alaska a week or two later.

I told myself..., and Julie..., that I was going for the money. A lot of guys do that..., and don't last long in remote logging camps. So, Leslie Cutting offered a bonus to guys who stayed long enough to cut one million board feet of timber. I was determined to stay long enough to cut that much and get the $10,000 bonus. I figured it would take about four months. The Labouchure Bay logging camp was on the northern tip of Prince of Wales Island in southeast Alaska. Four hours of rough gravel road to the nearest town of Craig..., and a half hour boat ride to the nearest phone. Luckily..., I like to write. But on the phone Julie would say things like, "I miss you and want you to come home." I tried to explain to her the money issue and the need to stick it out. I told her that if she missed me that much she should quit her job and come up to live with me in the logging camp. I never dreamed that she would give up her job. She had worked her way up to the manager's position at the restaurant where she worked..., but the next time I called she said, "Well..., I gave them my two week notice at work."

I really hadn't seen that coming..., but there it was. I flew home and we packed up the little Toyota pickup with as much stuff we could cram into it..., and save room for us, teenage Jamie, a big black Great Dane, an Old English Sheepdog, a Pit Bull, and a very frightened Kitty. Off to Bellingham, where we caught the Alaska Ferry for a one day, two night cruise to Ketchikan. A couple of days in Ketchikan before we could catch another ferry to Craig..., then the long drive to Lab Bay..., and our cracker box camper-trailer with two minute warm showers and one TV channel. We loved it..., and lived that adventure for four years. There was about a two month lay off each year when we would return to Forks and our place there. A couple of times we took the ferry to different spots in Canada and drove home from there.

On one of our trips "home" we were returning from the ocean beach at LaPush. We would almost always take a little detour and come home via the Quillayute Prairie road. It is a nice drive and reminds you of the Weippe and Fraser prairies. You can also get a good view of the snow-capped Olympics on a clear day. We happened to see a For Sale sign on a four acre, undeveloped parcel. It was over-grown with a proliferation of a noxious weed called Scotch Broom..., and about a dozen wrecked, abandoned, stripped out car bodies..., and all the accoutrements that go along with a junk yard. A lot of that stuff .., as we would discover later..., was hidden by the Scotch Broom.., but the view of the mountains was shining bright. We bought the property before we headed back to Alaska.

The last year we were up in Alaska wasn't meant to be that. It was going to be great. We had the trailer in Forks and the property on the Quillayute Prairie paid off. I had received a promotion to a Bull Buck position and we had moved from our cracker box camper into a three bedroom trailer with a real shower. Then Leslie Cutting decided to fold up shop. The same things effecting the logging industry down south had crept north and Jim Leslie made the decision to get out while the getting was good. I worked a couple of other jobs on other islands while Julie stayed at Lab Bay..., until that camp was closed. I had celebrated my 40th birthday in Alaska and there weren't many logging jobs that offered any kind of retirement plan. So when we returned to Forks I began to explore other career options. Since there was a minimum custody prison about thirty minutes south of Forks and a close custody facility about 30 minutes north of Forks, the employment prospects made it a logical choice. The guy I talked to at Peninsula College suggested that if I ever wanted to do anything but "walk the tiers"..., meaning if I was truly interested in career advancement I should get at least an AAS in Criminal Justice. With the help of WA State Re-Training program and my previous college credits I was able to get that two year degree in a short time. Now..., instead of jockeying a chain saw..., I jockey a computer as a Classification Counselor.

The rest..., as they say..., is history. I hope to get some stories and pictures of the adventures of developing our property on my web site..., someday. Julie and I are living and loving there now..., along with three horses..., and too many dogs, cats, chickens, and ducks. So..., if I haven't bored you to death so far..., I will quit while I am ahead. And hope that you all have faired as well.., and been as happy as I have been since graduation.