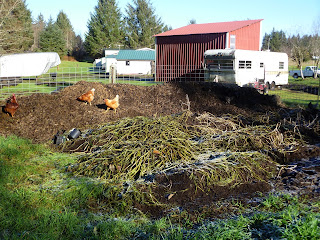 That ought to finish off the spud plants in The Garden.  Yeah…, about half of them were still green and hanging in there.  OK…, the monsoon rains had beat them down pretty good…, but they were still green laying there on the ground.

A few very short years ago…, yeah the years are slipping away way too fast these days…, I wrote a piece for The Agonist called, “Biscuits and Gravy and the First Killing Frost”.  It was dated 10/12/09.  A very late first freeze this year…, and a very early spring and summer that helped set off a fire season for the record books in the Pacific Northwest.  The dry spell during the summer browned up our grass pastures here on the Olympic Peninsula to a state that I haven’t witnessed in my 25 years here.  We got some early rain this fall…, enough to green the pastures back up…, but it didn’t seem to cool off that much.  September furnished us with some hot flashes..., but not much out of the ordinary.  October was about average…, during the days..., it seemed.  But I noticed that it didn’t cool off much during the night.


I posted pieces about Joe’s books, “Deer Hunting in America: Dispatches from the Class War” and “Waltzing at the Doomsday Ball”and “Rainbow Pie”.  I noted that it took a few essays to really set the hook at first…, but hooked I was…, and am.  Probably…, hell…, no doubt…, my favorite essay is, Ghosts of Tim Leary and Hunter S. Thompson.  Yeah…, Joe and I had a lot of likes, loves and lusts in common…, liquid libations, lovely ladies and Lysergic Acid Diethylamide.  And always..., always..., some music in the background.  The dedication to that piece was a teaser too, “This essay is dedicated to Gypsy Joe Hess (1919-1988).”

The intro to it was this…,

Everything Americans think they know, they learned from a televised morality play. It's all theater. You root for some good guy and boo some bad guy. You pick your own, but you dance to the tune of the men running the show. It's mind control, pure and simple, and if there is an American immune to it, then he is probably living in a snow cave somewhere in Alaska.


Damn right I Googled “Gypsy Joe Hess” when I read the essay a couple years back…, and got no hits.  I do now though…, after this title piece by John Lingan was run at The Baffler - Totally Pure - Joe Bageant drops out.