The last few years I have been doing a bit more than my share of bitching about getting old.  But last weekend after I completed the chores and was feeling ever older, I had a few cold beers in The Saddle Bar(n) and I started feeling a little frisky and particularly witty…, so I thought I better go into the house, log on to Facebook and have a little fun.  Yeah…, I thought I had a couple of good one-liners to post up and hope for a few “likes”.  Then I saw that an old friend, Dave McIntosh, who was four years younger than me…, wasn’t going to get any older.  The only words I could muster to another dear friend and his partner of 20 plus years were, “Oh my gosh Ellen…, oh my gosh…”.  And it still isn’t easy coming up with any words.

We called him “Snake” when he was a high school freshman playing basketball.  A little on the skinny side, mostly knees and elbows, but lightning quick, and sneaky too.  In the later years after high school, he put on a little weight and was a big, raw boned, lanky, fireball throwing fast pitch softball pitcher.  Unfortunately for our Fraser Hippie ball team…, he played for the Timber Inn from Pierce.  I’m sure it is a result of my old age and the Alzheimer’s that I can’t recall for you all the hits I used to get off him!!! Yeah…, Dave would get a laugh out of that one, for reasons I swear..., I can’t recall.  But he was easy to get a laugh out of.  In fact he was always laughing…, well…, almost always.  .  I do remember that one game when he was just learning to pitch…, and having a little bit of a control problem.  Of course our team was getting on him about it and he started getting a little frustrated, and like sharks smelling blood…, we laid it on.  You could see that he was getting mad…., and my cousin Jimmy started calling him “Mad Mac”.  Dave pretty much lost it there on the mound and said, “I’ll see you after the game Spencey!”…, and that wasn’t all he said.  When he gets up near those pearly gates on that field of dreams he is on his way to…, he’s gonna have some explaining to do about his language that day.  But after the game, he laughed it off…, and we were all real relieved.  Yeah…, he was always trying to make a joke out of everything.  He was always the life of the party…, though he wasn’t trying to be…, he was just trying to make sure that everyone was enjoying themselves as much as he was.  None did…, but it wasn’t for his lack of effort to make it so.

I never had the pleasure of working on the same logging crew with Dave…, but I have no doubt that all the glowing reports of his abilities, efforts and ethics that I heard from others in the business were true.  I can attest to the fact that he could be Johnnie on the spot and keep his cool in a pressure situation though.  I mentioned his role when I wrecked the crummy in the Robert Earl Keen story and video…, and Jimmy’s wife Debbie let me know that was only half the story.  Dave had to drive Jimmy and I on home that night.  I cropped out the missing finger on John Thompson’s left hand in the photo above…, Dave and another friend just happened to be on their way to Orofino when they happened upon the accident that resulted in the loss of that finger.  He got us to the hospital and a scene there that we needn’t describe here.  We got to have a good laugh about that one when I got to see him and John this summer out on the North Fork. 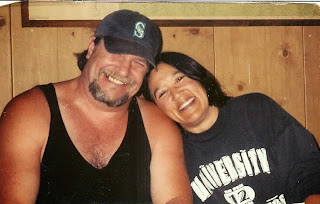 Dave wasn’t a singer or musician like the fellow in this Eagles song…, but he was certainly an entertainer who touched a lot of hearts.  So, this one’s for you Dave…, and for you too Ellenor.