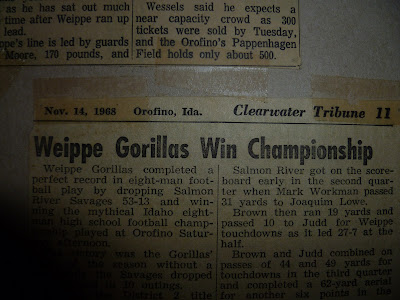 My old friend Mike Green sent me some old Weippe high school pictures that he found along with a newspaper clipping from one of our football games.  They brought back some old memories..., yeah..., I do mean OLD.  I’m sure he won’t mind if I share my email response to him with all of you.

Thanks for the pictures Mike..., and the newspaper clipping.  Julie called me at the job to tell me about them.  I was somewhat surprised.  She won’t even open a Christmas card that has both our names on it.  Not so with your letter.  Ripped open no less.  Maybe she thought you had sent some new juggling toys or something.  She still has the balls you sent several years back, hidden away from me so I can’t practice.  She says she is going to show you a thing or two next time she sees you.  Yeah.., she remarked on your penmanship…, and yet again, asked me why such a good looking guy like you isn’t married..., but she didn’t ask me about the touchdown mentioned in the clipping.  I guess she was just being considerate of my modesty and reluctance to talk about my athletic feats of accomplishment and my natural tendency to shy away from self-promotion in that regard.  I was honest with Julie.  I told her that I didn't remember THAT touchdown.  She may have thought that it was because I scored so many that a mere 5 yard scamper so paled in comparison to the many more memorable long distance scores.  But the rest of the story..., as Paul Harvey used to say..., is that I don't remember ever scoring a TD.  I threw for a few at Timberline my senior year..., but don't recall any, in any fashion, at Weippe.