Well..., you can’t say I didn’t warn you to hold on tight three years ago..., when I last updated The Blog.  And it is damn good thing I took my own advise to heart.  These last three years have been quite the rides around the sun..., let me tell you.

From a personal perspective it appears to be one speed bump after another.  In December of 2017 I took Julie to Bremerton for what was supposed to be a minor surgery..., as I was out in the waiting room the doctor came out and said there were some major issues and she would be in the hospital for a while.  I didn’t even have a tooth brush or razor with me..., I had to buy those and get a motel room.  She ended up spending four days in the Intensive Care Unit.  We didn’t own a cell phone (still don’t) and I had to borrow a cell phone from someone at the hospital to call the job supervisor and say, “I don’t know when I will be back”.  And the gals running the Motel 6 flipped a switch for me so I could make some long distance calls to let some folks know what was going on.  If I had had my address book with me I could have alerted a few more people.

A few lessons were learned from that one..., the most important..., was the importance of medical insurance.  When they send you a statement they make sure to remind you of that fact..., they show you in 20 point font what it would have cost you without it.  Over $378,000. 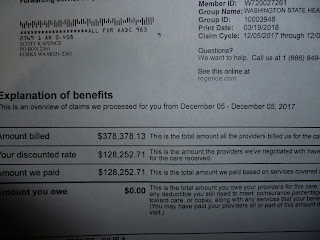 Even if we only had to pay the price the insurance was charged..., under half price..., it would have been financially devastating for us.  A lot of folks out at the job ask me when I will be retiring..., with an air of, “Shouldn’t an old fart like you be put out to pasture already?”  I have a copy of the insurance statement on my desk and tell them I won’t be retiring until Julie is old enough to get on Medicare.  That will be a couple more years down the road for sure..., now that Bernie has dropped out of the Presidential campaign.  Not too likely that we would get Medicare for All even if he had been elected..., too many politicians..., from both parties..., are raking in too much money from those health insurance companies that are raking in billions to see that happen.

And don’t believe for a minute that those health insurance companies will be hurt by this COVID-19 debacle.  Since Obama Care was enacted they are operating virtually on a cost plus agenda.  They are guaranteed a profit margin..., so the more money they have to spend..., the more money they get to make by raising cost of their plans.  And after all the bluff that the Republicans spewed with vote after vote to repeal Obama Care while the Democrats were in control and all the bluster from The Chump that one of his first priorities would be to repeal it..., when they had the chance with control of the Executive, House and Senate..., it didn’t happen..., see above..., too many politicians are raking in too much money from those health insurance companies to see that happen.  It is all a big money game..., and the big money is literally flowing out..., again..., to rescue the mighty corporations while they sit on their asses..., and our asses are ordered to stay home and wait for a check that might cover the rent..., for a month...,  if we are lucky.

Yeah..., keep on hanging on.  According to Google...,  “In 2017, 335 natural disaster affected over 95.6 million people, killing an additional 9,697 and costing a total of US $335 billion.” “In 2018, there were 315 natural disaster events recored with 11,804 deaths, over 68 million people affected and US $ 131.7 billion in economic losses across the world.”  “In 2019, there were a total of 409 natural disasters events worldwide.”  Hurricanes, typhoons, wildfires, heat waves, droughts, flooding, earthquakes, tsunamis, melting polar icecaps, warming and acidifying oceans, coral reef bleaching, fresh water shortage, global warming and climate change are raging..., and nothing is being done about it. 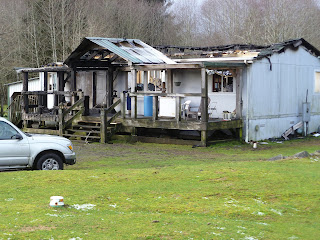 I can’t blame that on The Chump or Climate Change..., or maybe I can.  The Chump denies it..., and the storm that caused the generator to be started because of the power outage could be Climate Change related.  But no need to dwell on that..., it is what it is.  The place didn’t burn to the ground..., we saved a lot of stuff..., my computers, my guns, art work, too many books and record albums, lots of clothes..., but the place is not fixable and The Saddle Bar(n) is now crammed full of that “stuff”.   No human or animal casualties..., thankfully.  We had a little stash of money that enabled us to buy a small camper trailer and we are getting by just fine..., wondering what the future will bring us next.

One thing that I am sure of is that we won’t have The Chump to kick around much longer.  I have commented to several friends on Facebook not to worry when they say that he will get re-elected.  No matter how hard the Doofus Democrats try to give it away..., and good gosh they are doing everything they can..., short of running Hillary again.  And don’t be shocked if they replace babbling Joe Biden with her..., or if she gets chosen as Vice President running mate for The Babbler.  Yeah..., even Hillary would win against The Chump this time.  She won the popular vote by nearly three million votes last time..., and all the folks that stayed out of the voting booths because they could not stomach a vote for her and because all the polls and pundits said she was a sure thing last time will be out there voting against The Chump this time.  The Chump may not have lost any supporters..., even after needlessly killing a lot of folks by waffling  on the COVID-19 response until the situation was so dire, even he could no longer deny it..., yeah they still love and support him.  But he hasn’t gained any new supporters and he has earned the wrath of many who just thought he was a doofus and a joke.

Speaking of COVID-19..., the delayed response and failure to isolate and contain it early on led to an explosion of infections that was indeed scary.  In the beginning the number of positive cases in the U.S. was doubling about every four days and increasing nearly 20% every 24 hours.  The number of deaths in 24 hours was doubling every three days and increasing at a rate of 36%.  With numbers like that it is easy to see why alarm bells were ringing and the projections were for millions of deaths in America alone.  But it has tapered off immensely..., as of 5/1/20..., about a month later..., it is taking almost 25 days to double the number of positive cases and they are increasing at just a 3% clip.  The deaths are taking 21 days to double and increasing at a 3% rate.  This trend is most definitely a good sign..., that isn’t getting much attention.  Here's a link  https://www.ianwelsh.net/may-1st-us-covid-data/  The media like to report just the numbers..., “2000” deaths a day the headlines scream!  Don’t get me wrong..., that is bad..., but not nearly so bad as it would be if the initial numbers had continued in the manner they started out at.  And a couple days in late  April only recorded 1000 deaths. It is debatable whether the “lockdown” has actually been the cause of this trend..., I tend to side with those who say it was unnecessary and ineffective.  Mike Whitney says  http://www.informationclearinghouse.info/55111.htm

The lockdown was conjured up by made-for-TV infectious disease experts who based their recommendations on the results of discredited computer models that don’t square with reality. In short, their calculations were wrong, thus, the policy they cobbled together, is also wrong. This is not a liberal vs conservative issue.  This is not a Democrat vs Republican issue. The issue is whether policy should be shaped by data and science or by fake computer models and the relentless fear-mongering of the media. That is the heart of the matter.

The virus isn’t something we choose or don’t choose, and it’s certainly not something that can be avoided by bolting the door and hiding under the bed. There are only two paths to immunity: Vaccine or the natural immune response of antibodies. That’s it! There is no third path. Self quarantine is not a solution, at best it’s a temporary fix.  Eventually, everyone will have to emerge from their respective spider-holes and reenter the real world. What other choice is there?

The social distancing certainly helps..., we have known that for years just from dealing with cold and flu virus..., but the masks are really only necessary if you are around someone infected or if you yourself are infected.  I know..., you never know who might have it or even if you might have it yourself..., but if you don’t get close enough to let people drool on you..., you shouldn’t be in too much danger.  Yeah..., take some common sense precautions if you are healthy..., and more precaution if you are at risk..., but I don’t believe that there is reason to panic or carry things too far.  The thinking that we can keep this lockdown and mask up routine going  until they find a vaccine is pie in the sky hopium.  We have never found a vaccine for the common cold virus and we won’t find a miracle cure for this one.  Keep in mind that this virus didn’t “wipe out” any cruise ships or nursing homes..., the survivors significantly out numbered the deaths..., so there is some kind of immunity in our bodies that can be tapped..., and it looks to me like that immunity is being spread.  Let’s hope that it is spreading faster than the virus.

We must not forget about the financial-economic situation that this COVID-19 calamity has “caused”..., bullshit..., I call bullshit.  It is a a “God send” I am sure Goldman Sachs is saying..., something to blame the the meltdown on.  In 2008 Goldman and all the other To Big to Fail Banks and Wall Street were bailed out and given a new lease on life by the Federal Reserve and the bought and paid for politicians..., with not so much as a reprimand or corrective action taken.  In fact..., nothing was done to insure that this would never happen again.  Well..., here we are..., with another bailout that literally dwarfs the 2008 one.  And me and you are still waiting for $1200 “stimulus checks” to see us through a stay home with no income lockdown and a make your own mask pandemic..., while the plutocrats are raking in $billions.  Yeah..., and to pay for it..., our taxes will be transferred from safely net programs to million and billioniers to pay for their tax cuts.  Who needs food stamp money when we can give it to rich bastards that know how to put the money to good use..., by buying back stocks, paying out dividends to stock holders and “compensating” CEO’s and other executives for screwing over the hired help?

Well..., I guess that is about enough for now..., hope you are fairing a bit better than us.  We will keep plugging along..., for as long as they let us.  Oh..., and don’t forget to hang on tight..., this ride is going to be one to remember.