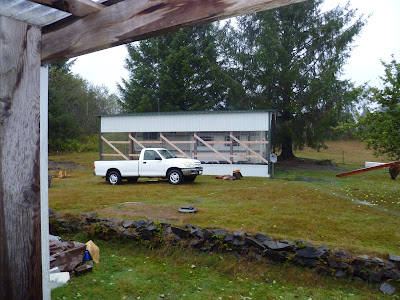 It felt good to slap on the leaky rain gear and get out in the first monsoon of the season to clean up the horse manure that had been accumulating in the pastures while I worked frantically to complete The Camper Barn before those monsoons arrived.  Hey..., it's election season..., and lying is not just accepted..., it is expected.  But I am telling you the truth..., and nothing but the truth.  Vote for me.


In the spirit of this election season, I should tell you that I built that all myself..., like Mitt Romney..., but I am not that kind of candidate.  When I consulted with an old timber cutter partner of mine, Rick Gale, about the wisdom of using up some of the timbers left over from a house building dream..., that turned out to be a Front Porch, Gar-Port, and Little Red Horse and Hay Barn..., he insisted on helping out.  Well..., it might have been after I explained to him how I was going to use the 12 foot long 6x8 beams for the low side of the bents, and 14 foot long 6x8's for the high side, with a 16 foot long 6x8 rafter topping the posts off (with knee braces of course), and how I would build them on the ground and lift the bents into place with my little backhoe/cat, position them into place on the concrete piers, get them anchored and braced, and build on.  Rick gave me a look like I was Romney telling him how he is going to cut taxes for his rich friends and corporate sponsors and it won't cost the middle class and the poor a single penny.  He eyed my little backhoe unit with it's short reach, and I quickly told him how I was going to chain a 12 foot 6x8 to the bucket of the backhoe so I would have a longer reach.  He said, "You give me a call when you are ready to do that."  Now Rick isn't quite the same man he was back in the day when we cut timber together.  Another cutter he was working with had a tree get away from him a few years back..., but that tree got Rick.  The fact that he would never fully recover from the physical injuries he suffered wasn't bad enough..., he developed a rare form of cancer that required a full stem cell transplant on top of it.  He may not physically be the same man..., but he has heart.  And not wanting to break that..., I didn't make him beg to get in on the glory. 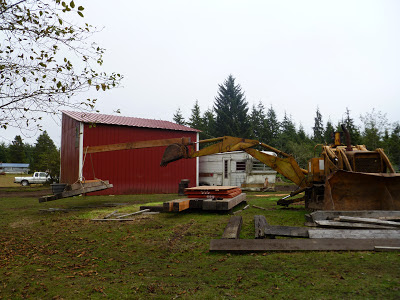 My other helper was a partner from my current job out at the prison.  Dave Mohn is about 6' 6'' tall and about 240..., of solid muscle.  He swims laps at the local pool every morning before he heads to the job, spends about 20 minutes in the prison gym before work, and works out there during his half hour lunch break.  He did 20 years in the Army..., much of that time as a Green Beret and later in Delta Force.  Yeah..., I have no trouble backing him up out on the job.  In fact..., if there is ever a tense situation..., I am right there, squarely behind him.  When I told him about the plan, he at first gave me what is known in the business as "the thousand yard stare".  But he quickly snapped out of it and said something like, "I want in."  I don't remember the exact phrasing..., but I figured that it would only be fair if I allowed him to back me up for a change.

When the day finally arrived..., after may weeks of digging holes for the concrete piers..., and mixing concrete in a wheelbarrow to pour into them, and many trips to Home Depot, and many hours of cutting and carrying beams from one end of The Ranch to the other, and many hours of nailing and gluing bents together, I was ready.  The first thing Rick and Dave wanted to know when they showed up was, "Why didn't you move the camper out of the way?"  I explained that when my Dad passed away, I was left with a Toyota Tundra pickup and a fifth wheel horse trailer..., so we purchased a fifth wheel camper for Jamie.  That was before I had taken possession of the pickup.  The former owner of the fifth wheel had delivered it to the site and we had set it up.  When I got the pickup..., it turns out that it has an entirely different type of fifth wheel connection.  I injected that the Old Dad is probably laughing at me from wherever he ended up.  But I added that the last laugh is on him because now I have Jamie right were I want her.  When she gets to thinking that she has too many chores on The Ranch and threatens to move out, pay for her own trailer spot, electricity, water & sewer, dog food, hay and no longer has to borrow food from our refrigerator..., I can say, "You can move out when you find someone to pull your trailer out of here..., because I can't do it."  Yeah..., I got the last laugh after all.  Rick and Dave looked at each other..., shook their heads and said that we better get to work. 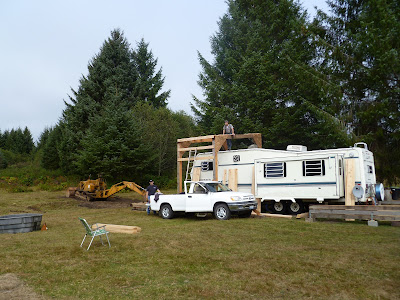 Well..., Rick and Dave didn't slow down the operation as much as I suspected.  Though they did insist that I reposition the backhoe when the first bent wasn't quite close enough to the proper location from the position I had chosen.  To humor them..., I moved the backhoe..., so they wouldn't have to wrestle four or five hundred pounds of bent three or four feet by hand.  I tried to get Julie to take some pictures of us with the bent dangling from a rope at the end of the beam chained to the backhoe bucket.  She said she didn't even want to watch..., let alone take pictures.  So you will just have to use your own imagination.  I wanted to jump down off the backhoe and grab the camera while Rick and Dave were there under the bent..., but they would have none of it.  Camera shy I guess.  And then as we were getting other bents into place Rick and Dave didn't think that my plan of 2x4 braces were up to the task at hand..., so they insisted that we put them together with bigger lumber and include some of the OSB for what Rick referred to as "lateral" strength.  So..., in spite of the handicap that their help instilled in the project..., we did manage to get all the bents up and in place without any major mishaps. 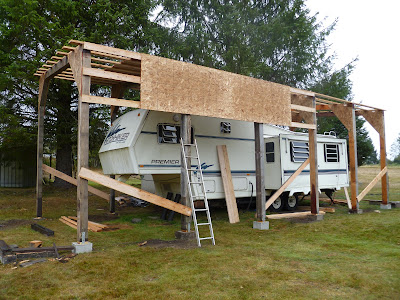 We were getting a little rain shower by the time we got that last bent up and braced.  I thought that rain wet aluminum ladders and high climbing might make for some real hilarious photo opportunities..., but a cold beer in The Saddle Barn around the propane stove sounded even better.  I invited the boys inside.  I tried to pay them for their help..., but they refused.  No, they said..., someday we may need a favor from you.  That day may never come..., but if it does?  Oh my..., I thought I left those kinds of friends back in Idaho.

Anyway..., Rick had quit drinking after the stem cell transplant and Dave limits himself to one beer..., so I invited them back.  Any time partners..., ANY TIME.